IKAH Tazkia is an informal association whose members are the 2016 Mecca pilgrims organized by Tazkia Travel. I was one of them.

Once the journey is over and people (except one) are back home, we established an association. We established it because wewant to stay in touch indefinitely and as much and as often as possible do something good together for the community in general.

The main part of the logo is a stylized version of 5 petal flower symbolizing the 5 pillars of Islam. It is shaped as a square to symbolize stability and completion as the members of the association is expected to be able to live in stability and calmness and radiates those quality. It is also done in five colors to symbolize the diversity of its member’s origin, age, and occupation.

The text “IKAH TAZKIA 2016” states the identity of the association.

The text within the flower is surrounded by a tasbih (or Islamic prayer beads) to symbolize the fact that the association’s member is brought together mainly by their adherence to the faith of Islam.

The application on a CD cover released by IKAH on 2016

The alternative logo, with golden chain.

The alternative logo, with golden chain and sun burst. 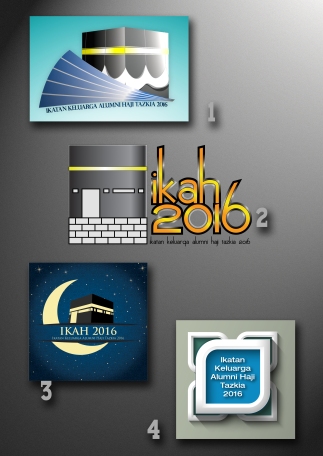